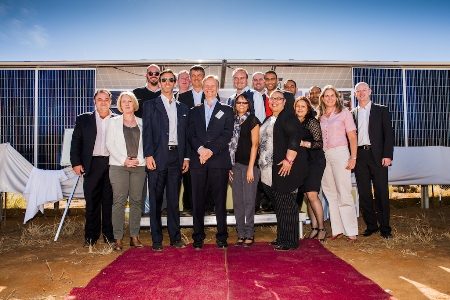 This week saw the inauguration of two solar power projects, De Aar Solar Power and Droogfontein Solar Power. Constructed at a combined cost of R3 billion the plants are contributing 100 megawatts into Eskom’s power grid as part of government’s Renewable Energy Independent Power Producer Procurement Programme (REIPPPP). This programme has attracted investments of over R120 billion to date, much of which is direct foreign investment. “Considering that South Africa has been rated as the 12th most attractive global investment destination for renewable energy, it is understandable that foreign investors are eager to help satisfy the country’s power needs, particularly in the renewable sector,” commented Mark Pickering, Managing Director of Globeleq South Africa, the lead investor in the two plants.

The African continent holds enormous opportunity for investors and developers. It includes some of the world’s fastest growing economies and holds abundant natural resources. South Africa is one of the most important markets on the continent with a pent up demand for energy generation. “Renewable-energy projects are being developed elsewhere in Africa, such as in Namibia and Kenya, whilst policymakers regard the South African REIPPPP as a benchmark. This is an exciting opportunity for the continent with its abundance of renewable-energy resources and need for electricity,” explained Pickering.

Pickering added, “What made South Africa particularly attractive to Globeleq as a foreign investor, was the well managed nature of the REIPPPP process, which has been lauded around the world. The programme has benefitted from Government’s explicit support, as well as the use of a transparent selection process implemented by some of the best technical, legal and project finance advisors in the world.”

The Department of Energy welcomes foreign investment to help ensure that the country can meet its target of generating 6 925 megawatts from Renewable Energy source to help move towards a low carbon economy, as well as contributing to socio-economic development and environmentally sustainable growth.