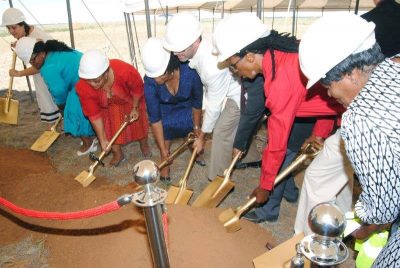 The 50 MW photovoltaic (PV) Droogfontein Solar Power project today officially celebrated the start of construction. The event was attended by guests representing the community, industry, international and local organizations, lenders and members of the government and local municipalities.  The project is one of the first solar facilities in the country to start construction as part of the South African Government’s Renewable Energy Independent Power Producer Procurement Programme (REIPPPP).  Earlier in the week, groundbreaking events were also held for Jeffreys Bay Wind Farm and De Aar Solar Power.

Jonathan Hoffman, Senior Business Development Director for Globeleq commented at the event:  “Today represents a great accomplishment for South Africa’s energy sector. The dedication and commitment of many individuals and organizations has turned Droogfontein Solar Power into a reality.  The project adds to Globeleq’s extensive African power generation portfolio and illustrates our ability to mobilize capital for sustainable and productive power generation investments. We look forward to working with our consortium partners, the contractors and community to successfully build the project on time, safely and within budget.  Globeleq proudly endeavours to help create and expand South Africa’s renewable business and continue to create more jobs.”

The Droogfontein Solar Power project is located 15 km outside Kimberley, in the Sol Plaatje Municipality in the Northern Cape.  The plant is being constructed on approximately 100 hectares of land leased from the Droogfontein Communal Property Association.  It will generate 50 MW of clean renewable power at peak production.  Once constructed, the Droogfontein Solar Power facility will convert energy from the sun into electricity using 168,720 Suntech 290 watt PV panels that will be fed directly into the Eskom 132 KV distribution system.

Leila Mahomed-Weideman, Director, Operations and Development, Mainstream Renewable Power commented:  “Mainstream Renewable Power is delighted to see the Droogfontein Solar Power project in the Sol Plaatje municipality start construction.  The project has been in development since 2009 and was developed with our partners Genesis Eco-Energy.  We are now focused on bringing the solar farm successfully through construction with our partners so that it can start generating clean, sustainable energy from 2014 as well as bringing long term social and economic benefits to the region.”

In November 2012 Droogfontein Solar Power signed a 20-year Power Purchase Agreement with Eskom for the sale of electricity and an Implementation Agreement with the Department of Energy for the project.  Mobilisation of the construction teams commenced in December 2012 and construction is expected to be completed in mid 2014.  Siemens Ltd, South Africa, part of the Siemens Group, acts as Engineering, Procurement & Construction Contractor (EPC) for the project and will provide full maintenance services to the solar facility for the first five years of operation.

“This solar project is just what the community of Droogfontein needed in terms of job creation, community ownership in that the community owns 4% of the project,” said Thabo Modupe, the Droogfontein Communal Property Association Chairman, “It will also add value to our land and showcase our farm as one of the first to have a project of this magnitude. As a community we really look forward to when the plant commences operation”.

During the construction period the project is expected to create hundreds of jobs and during the twenty year operation of the solar plant, long term jobs will be needed to operate and maintain the facility. More indirect jobs will be created at local manufacturers and suppliers and contractors are committed to source as many people from the local community as possible.  Once operational, the project revenues will benefit the local community through socio-economic and enterprise development programmes.  When generating, the facility is expected to supply enough clean, renewable electricity to power more than 30,000 South African homes and eliminate over 79,368 tonnes of carbon emissions each year.