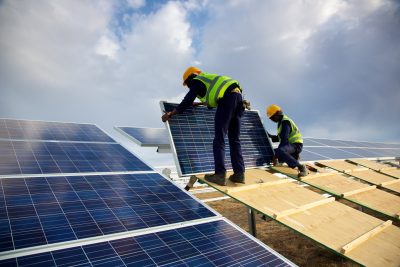 Independent Power Producer, Droogfontein Solar Power, continues to positively impact on the local communities through employment and training. During the construction period an average of approximately 200 people were employed, however, during the peak of construction, over 350 workers from the local community were employed. “The number of jobs varies from month to month depending on the level of construction, with a peak of approximately 450 jobs during July and August this year,” commented Kevin Foster, Project Manager for Droogfontein Solar Power.

The contractor responsible for building the solar project is committed to employing as many people from the local community as possible.  This has resulted in about 75% of the Droogfontein Solar Power total workforce on site being drawn from the local population, which goes a long way in helping to uplift communities. “It is not only important for the contractor to employ local community members as required by the Department of Energy, but it is in our interest to ensure that the local community benefits through employment earnings and skills transfer, which can in turn be applied to future projects,” said Foster.

In line with renewable energy’s aim to positively impact on the environment, Droogfontein Solar Power also has an indirect effect on businesses, especially service providers, local manufacturers and suppliers.  “The greater Kimberley community undoubtedly benefit from this Project through supplier contracts during the construction and operations phase, as well as acquiring training and experience in a new industry to South Africa,” said Kevin Foster, Project Manager for Droogfontein Solar Power.

The project has also helped boost the local tourism industry, with an increase in hotel room occupancies, board, and other services required by the project staff.  “This solar power project has already drawn a significant number of interested visitors to the area, and we expect this to increase substantially once energy production commences next year,” added Foster.

Droogfontein Solar Power and its contractors procure goods and services from the local community where possible. “Many of the plant components are not yet available locally, but there is great potential for the supply of solar power equipment in the Kimberley area for future projects,” explained Foster.
It is highly likely that additional Department of Energy Renewable Energy Procurement Programmes will develop in the Northern Cape, which means that workers trained on the current project will have an advantage for additional employment.  An abundance of the skills gained on the Project will of course be applicable to other construction projects as well.